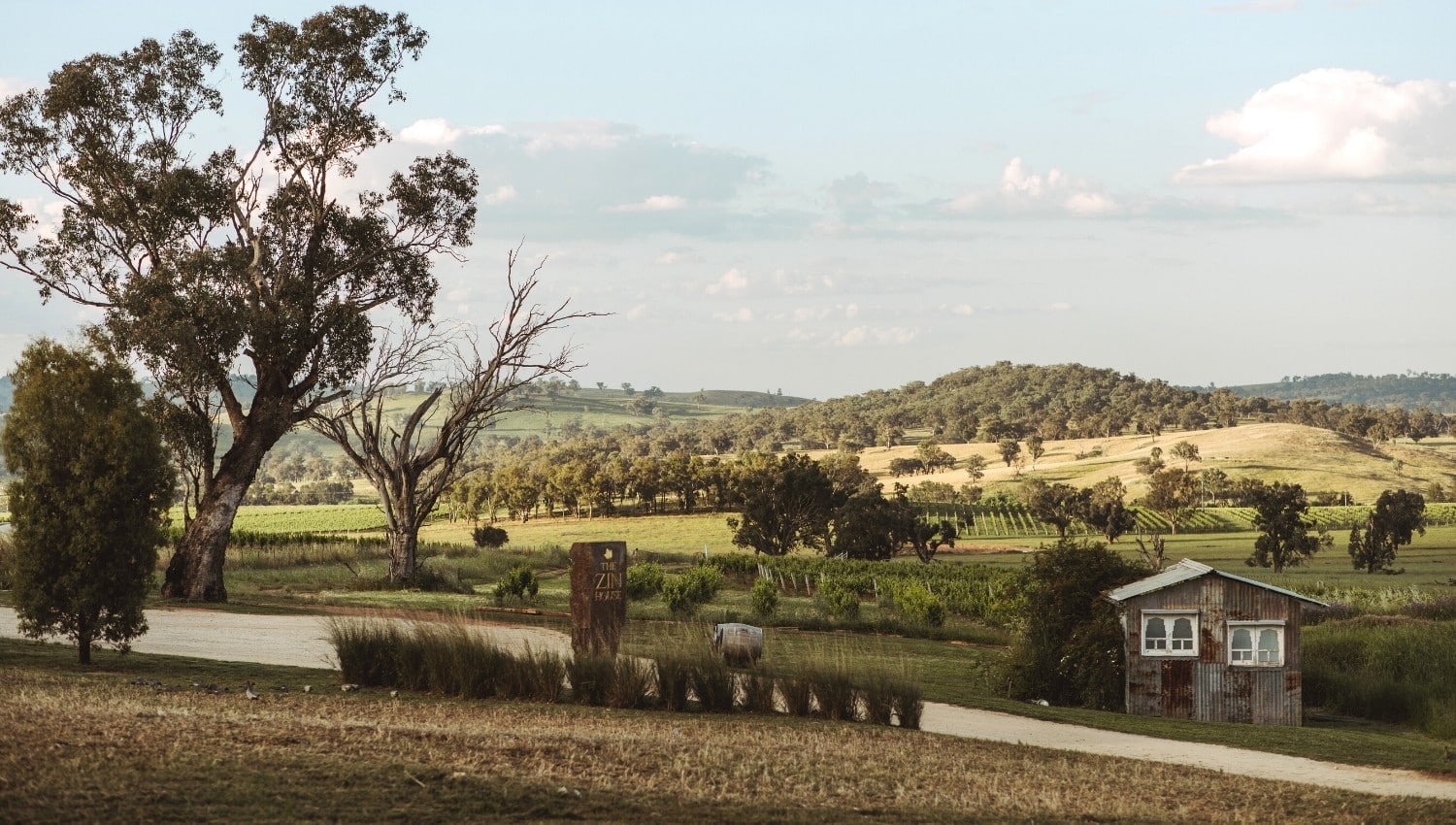 A lifetimes dedication to food & wine

Lowe Family Wine Co is a reflection of David Lowe and Kim Currie’s dedication to their crafts. Made up of Lowe Wines, Zin House and The Pavilion, LFWC’s focus is on providing premium regional food, wine & experiences here in Mudgee, NSW.

Alongside David and Kim lies a team of exceptional people we like to call the ‘Tinja Team’. With over 40 people working across the vineyards, gardens, kitchens, winery and office, each person plays an essential role in creating the ultimate Lowe Family Wine Co experience.

David has only ever wanted to be a winemaker, and to this day, that is what he does. Having helped his father plant the first vines on the Tinja property in ‘73, David went on to forge his own name in the winemaking industry. Following graduation from the prestigious Roseworthy college he became head winemaker for Rothbury Estate at 21 years of age. Between vintages working in the Hunter Valley under winemaking legends, David was one of the brat pack “Flying Winemakers” who cheekily taught the French modern winemaking.

Moving back to Mudgee, David completed his first vintage as CEO and head winemaker of Lowe Wines in his newly constructed winery in 2000. Within a few short years his 2003 Zinfandel was awarded best of it’s kind at the International Wine Challenge.

In 2013 the NSW Minister for Agriculture awarded David the Graham Gregory Award for his contribution to the NSW Wine Industry and in February 2014 he was awarded the Wine Communicators of Australia’s Legend of the Vine Award.

Kim has championed NSW regional dining and food for more than three decades with produce and producers always the central focus. Moving from New Zealand to Australia in 1982 Kim found herself in regional NSW, beginning her long history across the region.

This includes establishing Farmers Markets in Orange, Mudgee, Bathurst and Cowra, as well as her own restaurant & eateries including The Rylstone Food Store and Bridge View Inn.

In 2006 Kim moved to Orange to begin work as executive officer of Brand Orange, helping to build and solidify that region’s reputation as a wine and food leader. In 2011 Kim made the final move back to Mudgee, working to create and expand the food & wine offerings at Lowe, followed by opening The Zin House in 2014. During 2011 – 2016 Kim also served as Chair of Fine Foods whilst a NSW Royal Agricultural Society Councillor.

Career acknowledgements include the Maggie Beer award for Outstanding Contribution to Australian Food in 2005, Jaguar Awards for Excellence in Innovation & Travel 2001 (Central Ranges Food & Wine), Winner of NSW Rural Woman of the Year in 2009 and induction into the Sydney Morning Herald Food Hall of Fame in 2011.

A Dr by title, Tim’s background begins in the fields of science. Growing up in the Northern Beaches, Tim first graduated with a Bachelors of Science (Honors) at The University of Western Sydney in 1996, followed closely by his Ph.D in Chemistry in 2003. After some time away from the sciences, Tim returned to university to graduate from a Bachelor of Wine Science in 2013.

Gaining practical experience during his studies, Tim worked for Philip Shaw Wines in Orange, Bimbadgen in the Hunter Valley, plus a stint on cooler shores as the vintage red cellar supervisor at Spring Creek Vintners in Marlborough.

On return to Australia Tim joined the team at Wineworks (Gilberts) 2013/14, before taking on the winemaker role at the organic Thistle Hill winery in Mudgee from 2014 – 2020. Shining light on the end of a difficult year, Tim joined the Lowe Wines family in Nov 2020, working alongside David Lowe as winemaker. He brings with him not only a wealth of knowledge, but also his keen eye for photography and talent for bass guitar.

Growing up in a farming family from Armidale, Jim began learning the agricultural practices that make up great quality food from a young age. Beginning with an apprenticeship at the  Booloominbah Collection Restaurant in Armidale, Jim decided to pursue his culinary interests by enrolling in Ultimo TAFE in Sydney for commercial cookery.

Completing his studies with apprenticeships at Sydney’s Pier and Bilson’s, Jim headed for foreign shores to expand his experience with new cultures and food that comes along with them. During his time overseas, Jim refined his skills at restaurants such as the 5 Star Grand Palais in France – Le Royal Monceau, Boxermans Restaurant in Montreal, Canada, and with a two year stint at London’s 2 Michelin-starred restaurant, The Greenhouse.

On return to Australia, Jim joined the Sails on Lavender Bay team in 2016 as Head Chef, before trading the harbour views for rolling hills here in Mudgee. In 2020 Jim joined the Zin House team as sous chef, moving to head chef late this year. Alongside Kim and the team, Jim brings his extensive experience in fine dining, backed by his appreciation for the merit in the simplicity of growing great quality produce and sharing this with others.

Founded by David Lowe in 2000 on the ‘Tinja’ property, Lowe Wines produces premium small batch wines from our certified organic and biodynamic vineyards, winery and farm in Mudgee NSW.

Our wines are a direct reflection of how we grow our grapes – from Organic & Biodynamic Vineyards that are unirrigated and untrellised, with each wine speaking distinctly of the individual terroir, vintage and region.

The Lowe Cellar Door is open daily for wine tastings and regional platters, a visit is the best way for you to explore our range of wines, learn the stories behind them and meet the winemakers.

David's 2003 Zinfandel wins best of it's kind at the '05 International Wine Challenge.

We make our wines using small batch slow winemaking - put simply this is about doing things by hand to ensure the quality of the product. We start by growing the best possible grapes using organic & biodynamic practices. Then combine traditional winemaking techniques like open fermenters and amphoras, with innovative design such as preservative free wines.

The regional restaurant & food gardens were established by Kim Currie in the modern farmhouse adjacent to Lowe Wines in 2014. Specialising in long lunch & dinners, the set menu restaurant sets a benchmark for regional dining.

The Permaculture & Market Gardens welcome you on arrival, and form the basis of the experience at Zin. Head chef Nathaniel Destefano balances Zin’s guiding principles with a refined technique driven approach.

The Dining Experience at Zin is one to take your time with, we never double seat tables, so you can unwind, wonder between courses and soak up the flavours.

In its second year Zin gains One Chefs Hat from SMH, which it has held every year since.

Jim Wilson brings his influence to Zin as he takes on the head chef role.

The guiding principles of Zin are quality, generosity and authenticity. We produce food that tastes of where we live, prepared from scratch using what we and our neighbours grow. The dining experience is designed to reflect things we hold dear – taking time over good food and wine with those we care about, service that is warm and personable but not obtrusive, comforts with a little luxury and never ever having a time limit on your table.

The Pavilion at Lowe

A custom designed marquee overlooking the water & vineyards to the Mudgee hills, specialising in weddings and events with food by the Zin team.

Showcasing the best of Mudgee in one venue, The Pavilion was designed with weddings and functions in mind. Lying between Lowe Cellar Door and The Zin House it boasts the best views on the property, with lush sloping lawns overlooking the Tinja dam and vineyards.

Fully customisable for any occasion, the star gazing roof and opening side walls allow the space to flow seamlessly into the outdoors. With an open plan layout, The Pavilion seats up to 200 people for dinner and up to 250 for cocktails.

The Zin team can provide a range of catering packages to suit the individual, as well as different wine packages from Lowe.

More about The Pavilion

Kim finishes the final design of the marquee and it's fabrication is started in her NZ home town.

The Pavilion is constructed and installed by the talented teams of Ben Kubowicz and Clancy Currie.

The Bush Chapel construction is finished and the first ceremony conducted under it's new roof.

The terrace at Lowe Cellar Door is extended, opening space between the two venues.

Sorry, it looks like we do not support the browser you are using.

We recommend Firefox or Google Chrome.